Our sheep have a "pen" that is about half-an-acre where they live most of the time. At the top of the pen is a little wooded area that stays about 20 degrees cooler than the rest of the world on sunny summer days. When they are in their pen, the sheep are smart enough to spend their days resting up under the trees, chewing their cud and watching the world drift by below them.

They also have a pasture, that is about an acre. Earlier this year, before it got so hot, we let them out in the pasture for the day and put them in their more secure pen at night. Then it got hot and the pasture grass quit growning, so we kept the sheep penned up. They had their nice routine of socializing and eating hay all night, then resting under the trees in the heat of the day.

Last week, we got a few rains and the pasture grass had a growth spurt. After a few evenings of letting the sheep graze for a couple hours in the evening, I turned them out for the day yesterday morning so they could have the day out to pasture. They have fresh water and salt licks in both the pen and pasture.

When I went home at 2:00 to let the dogs out and check on the sheep. They were out in the sun, in the pasture, trying to graze and panting with open mouths. Gluttony is a powerful force. I tried to herd them in but they ran in all directions. I decided it would be worse to let them run than it would be to leave them out in the pasture. They all survived their foolishness and happily came into their pen for dinner. Funny how they want their dinner after spending the day eating.

This morning, the sheep are in their pen, up on the berm, under the trees, resting. They asked to go out after breakfast, but I told them to be happy they had a shepherd. They can go out this evening when it is a bit cooler and they won't be risking heat stroke while searching for that perfect bite of grass.
Posted by Jenonthefarm at 8:06 AM No comments:

I was talking with my mom on the phone yesterday. They were camping somewhere in the mountains of Colorado. Cell phones have changed our lives to a depth that I don't think anyone realizes, yet.
She said that my brother and sister-in-law are considering getting chickens. They are big on eating healthy and since we moved to Arkansas are having trouble finding local eggs and milk. Chickens are one big step, but they are manageable for many people. Milk animals, however, are a whole different dimension. 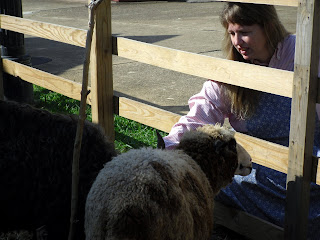 "Milk goats take a lot of devotion," I said, and the word got stuck in my brain. It is the perfect word to describe the relationship between dairy animals and their humans.
From Merriam Webster -
Devotion
Main Entry: de·vo·tion
Pronunciation: \di-ˈvō-shən, dē-\
Function: noun
Date: 13th century
1 a : religious fervor : piety b : an act of prayer or private worship —usually used in plural c : a religious exercise or practice other than the regular corporate worship of a congregation
2 a : the act of devoting
If you choose to have a dairy animal, you will devote time daily to milking, feeding and watering them. In order to get milk, the times must be on a regular schedule. Lack of routine creates stress and stressed animals don't milk.
Where other people have their daily devotional of reading, yoga, meditation or breathing - mine is milking. The schedule changes with the seasons, an homage to nature, but it is daily, 365 days a year. Right now I milk at 7 am and 7 pm, with little variation. This is a peaceful, relaxing, routine time for both me and the goats. It is a physical, mind-free routine that is centering and grounding.
Posted by Jenonthefarm at 9:51 AM 1 comment:

Our sheep have pets. It seems to be a sheeply thing. They have a lively curiousity and an empathy that is unusual in the livestock class of animals.
We first noticed this proclivity when one of Gabby's lambs kept following rabbits around the pasture. She did it a lot. She hung around their burrow and would wander around the pasture with the little bunnies. We named her Alice.
Alice went on to win the Reserve Grand Champion Natural Colored Ewe at the 100th anniversary of the Denver National Western Stock Show in 2006. Talk about falling down the rabbit hole!
We sold Alice in a show flock of Jacob Sheep as a part of the move from Colorado to Arkansas. But her story remains in the history of our flock.
This spring I've noticed the lambs have more pets than I've seen in the past. Filigree has her pet Fat Squirrel. She and Fat Squirrel hang around in the little grove of trees in the center of the sheep paddock. They appear to have games and conversations. Actually, Fat Squirrel seems to be oblivious to this relationship. He's just busy collecting, eating and burying food. But Filigree spends a lot of time with her head down in Fat Squirrel's business. I've got that sort of relationship with my dog.
Several of the lambs seem to enjoy the pair of Mourning Doves that nest in the pasture. The lambs have outgrown chasing the doves to get them to fly and now share their grain with the pair.
Of course, the lambs love the baby bunnies who are growing up in the briar patch behind the sheep. Flora especially likes visiting with them, though First goes and looks for them in the mornings after breakfast. That makes sense, First is Alice's granddaughter.
Posted by Shawn at 12:58 PM 1 comment:

This morning as I was making coffee, I looked out the window just in time to see a flash of a small black animal disappearing into the woods behind the sheep pasture.
I went to get my shoes and headed out the door in time to see all the critters react in alarm.

The angora goats ran to their llama and all gathered under her belly. They stood up big and tall and stared up into the woods. Their posture said, "We have a llama, you can't get us." Of course, I don't think they realized the llama would have a hard time fighting off predators with nine little goats underfoot.

The sheep all ran to the fence nearest the house and began hollering. "Maaaaaam! We're scared! Feed us!" Sheep are the ultimate stress eaters. If there's anything scary going on, they want to eat. I'm not sure that is a very sustainable behaviour for a species that is fairly low on the food chain.

The dairy goats looked at the other critters with disdain and began to tromp up the hill to beat up the scary thing. They have no horns or any other defense mechanisms, but boy do they have attitude!

I fed the sheep and heard the stray dogs in the forest take up the scent of a rabbit. They bayed and howled back and forth through the woods behind the pasture. I caught several glimpses of two small short-haired dogs. Nothing big enough to be a threat to our critters, but their barking sure frayed my nerves. They barked up and down the hill, through the forest. They had now been back there for more than an hour.

While I got dressed for work, I considered trying to catch them, but I really didn't have the time to go up into the woods. I wished I had a few fire crackers to scare them off. Now, three days after July 4th I come up with a use for firecrackers.

As I left for work, the stray dogs were still barking and our critters were beginning to ignore them. I hope the dogs are gone when I get home.
Posted by Jenonthefarm at 8:26 AM No comments: