A Day in the life

Checked glue on tile on kitchen counter. Dry and solid, one tile tilted. Will just have to grout it that way, it's stuck on now. 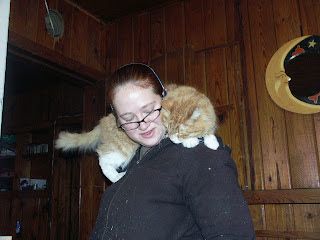 Milked Yampa, Beth (Erie is dry now). Grained 2 horses, 2 llamas, 24 sheep, 4 angoras, 8 dairy goats in their various pens. Lena went out later and broke ice and fed hay and took care of the rabbits. She and Ziffer came in to tell me they were done.

Checked email, listed Learn to spin kit and Learn to triweave kit on ebay. Replied to several email queries. Updated a few listings in the ebay store. Took pictures of Shawn's new carved crochet hooks. They are stunning! I think the Sun/Moon is my favorite. Started color/contrast correcting photos. The one here is not cropped or corrected, just a quick un-edited shot. Now you see why editors are so important.

Lena and I rode the horses out to pasture after they finished their breakfast. The pasture is a dry lot right now, until spring rains bring up new grass. 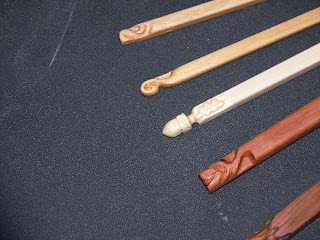 Next - Telephone conversation with business consultant. Some great new ideas for getting our products up there in the search engine rankings. She suggested labeling all product photos so they are picked up on Google. Now I need to figure out how to add alt tags. Some ideas for getting our cost of sales down. Lots of great ideas - lots of stuff to work on! Do you know how many pics we have out there - thousands, literally. And no time to work on it today, sigh...

Now pack the orders that are ready to ship. Not much today. A single crochet hook, even those are so beautiful and gracefully carved. A crochet hook set and a one foot triloom. I am out of the bright rainbow cotton I've been using to wrap the hooks. Used a light blue plaid cotton flannel.

I set up a sale on Spirit Bells and wrote a quick marketing email. I totally forgot to mention Mardi Gras!

Got list from Shawn and Lena for trip to town. Get grain and hay, groceries, gloves for Lena, nails and thumbscrews for Shawn, go fill out some paperwork at the Folk Center, go to bank and take the chainsaw into repair guy, it won't keep running.

Shawn and Lena left for workshop, took dogs. I gathered everything to take to town, packages, library books, yarn to deliver, checks to deposit. No keys! Walked the .6 miles to the workshop in very frosty weather. Found Shawn working on a beautiful set of hand turned knitting needles on the jet lathe and Lena making spindles. Shawn said he left keys on his desk - instead of on the key rack where they belong!

Brought dogs back with me so they could warm up by the fire and went into town. Stopped at the Fox post office to mail packages and check mail. Two bills and one check...

I can't believe how much the cost of everything has gone up! Items I swear we spent 13 dollars on last month are now 23. Food that was 62 cents is now 78... very scary. I spent all our money and headed back up the mountain. I forgot Lena's gloves, but I did get a bow saw to cut wood until the chainsaw problem is figured out.

I loaded the rest of the fleeces from the Fox store and went to Foxbriar to cut wood with new bow saw. It's slick, works real nice and is quiet. I cut about 8 truck lengths, loaded them on top of the hay, grain and fleeces and headed back down the mountain.

Lena helped me unload the truck and we did all the evening chores except milking. Nugget was a brat and wouldn't let me get on to ride in to her stall. I think the cold has her grumpy. High today was 25 degrees.

It must be some kind of a sign - the chicken I got to roast for dinner had 5 hearts! Put the chicken in and went to check on Shawn. He was putting the finishing touches on a gorgeous 6 foot cherry triloom. Said to give him a while to finish up.

I grouted the kitchen tile while Lena cut firewood. Ran out of grout... We sorted fleeces and put the old, crispy or buggy ones in the rock garden for mulch. Started making coleslaw to go with chicken.

Went to pick up Shawn. Brought back knitting needles to ship - I still need to finish the felted case for this set, and the cherry loom to nail.

Mom called. Lena finished coleslaw and garlic bread while I talked and stoked fire. Arjuna called, he and Lena talked about his new computer and his planned trip out here. He is planning on flying here in March.

We ate dinner. Then Shawn started nailing loom and watching Alien Resurrection while I did dishes and milked. Lena made butter from the goat's cream she's been collecting. After I put away the milk and finished dishes, I started doing my Friday marketing on the computer. The new cherry trilooms seemed a good feature.

Suddenly - it wasn't Friday any more! Shawn was done with loom and movie and working on his computer. I still hadn't replied to any personal emails or updated my blog... but I headed to bed anyway!

No wonder I can't get anything done - all that stuff I do gets in the way!
Posted by Jenonthefarm at 9:49 AM