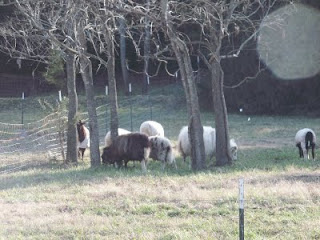 We moved the sheep up to their new pasture at Haven Croft yesterday. It's about twice as big as their old "home" pen. Thanks to Tina Marie, who loaned us her trailer, Lena and I were able to move the whole flock in two easy loads. The angoras have been living at Haven about a week and they were so happy to see the sheep that the smashed down the fence between the two pens and visited. We fixed that droopy section of fence and got everybody back in their own pens.

Pequena the llama was given the choice of whose pen she wanted to be in and she opted to stay with the angoras. They are brattier, but I do think they are more vulnerable to predators, so I might have made that decision for her anyway.
We do see quite a few loose dogs and hear the coyotes sing, so I like having protection for the lower-on-the-food-chain critters. We plan on moving the dairy goats and cow and the last two dogs tomorrow. I've sold the rabbits, but they haven't been picked up yet, so I guess I need to find a place for them, too. Then all the animals will be moved and we just have the studios and the rest of the household items. We keep moving and feeling like we're about half done...
It got down to 16 degrees last night, but it was dry and still, so everybody did fine. The sheep had trouble finding new places to bed down, but they eventually settled. The bright moonlight helped everyone stay comfortable. At one point when I checked on the sheep, a bright shooting star zipped across the ridge behind the house. It was breath-taking.
This morning, I checked on them about daylight and they were all still bedded down in the pasture. Half and hour later, I looked out and there were no sheep to be seen. I yanked open the back door, getting ready to run out in my wooly slippers and flannel night gown. Cute little white sheep faces peered up at me from the cedar grove at the back of their pen. They had discovered that they have access to a bit of the woods.
Posted by Jenonthefarm at 10:14 AM