When I was in middle school at the Colorado Springs School, I made a mountain dulcimer. His name was Herman and I carried Herman from there to Korea, the Philippines, Hawaii. I played him regularly as I finished high school in Alabama and then took him back with me to college in Colorado. We climbed Rocky Mountains together and howled bluegrass songs at the moon in the Smokies. Halfway through my sophomore year, Herman cracked. I didn't touch a dulcimer again. 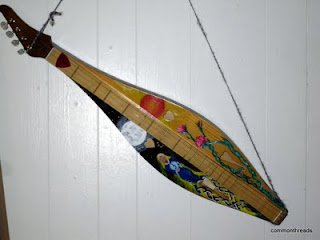 
When we came to Mountain View, Arkansas, music was everywhere and I started thinking dulcimer. Shawn bought me one for my birthday that year. It was a nice sounding little instrument. But I  never played it. A year or two later, my son, Arjuna, painted it for me for my birthday. It has hung on the wall of my office ever since as a very nice work of art. 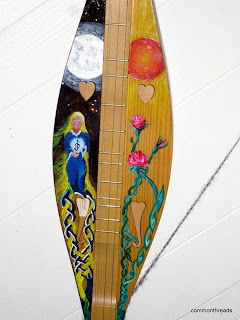 Then, three weeks ago, I came back into my office and Steve Folkers, the OFC cooper was playing my dulcimer. It sounded nice.
And Linda Odom talked Gail Lewis into teaching a Friday morning dulcimer class. Gail laughed at my "hippie dulcimer" when I got to class, but she was pleased about how nice and sweet this unique little instrument sounds.

Now I've been playing that sweet sounding little dulcimer for two weeks and yesterday she got her name.

Genesis
Posted by Jenonthefarm at 5:52 AM